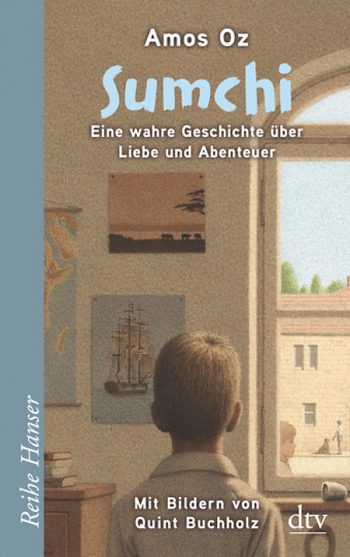 The first German edition of Amos Oz’s “Soumchi” (“Sumchi: Eine wahre Geschichte über Liebe und Abenteuer“) was published in 1993. About twenty-five years later, the publisher dtv has presented a new soft cover edition of the novel revolving around the boy Soumchi, who is fighting for his beloved Esthi and dreaming of adventures in far-off African Ubangi-Shari.

A wise, wistful yet tongue-in-cheek narrative about a childhood in Jerusalem, about winning and losing and about the things that really matter in life, featuring “atmospheric drawings by Quint Buchholz” (Sueddeutsche Zeitung, 2018).

END_OF_DOCUMENT_TOKEN_TO_BE_REPLACED
← “Lights off! Night in Picture books” – exhibition at the Rosenheim Municipal Gallery
Reading and presentation of “Sun, Moon and Evening Star” →